Starlit Lagoon (Starlit, SL) is a PMU 7 dungeon with Water and Psychic as the main types. It is located northwest of Archford, south of Voltaic Rainforest. It has 60 floors and a single boss at the end of it. There's a rest stop after Floor 44. The weather here can be cloudy, rainy, or clear. On Floors 45+, diamond dust weather can appear.

There is mild darkness starting on Floor 25, which gets deeper on Floor 45.

There is a rest stop after Floor 44. As you continue to go on, you will find that the way is blocked by doors. In order to proceed through, you will have to find the Starlit Key, which is hidden behind the tree below the top-rightmost tree. There's a Kangaskhan Rock for you to store and take items. There are also hidden Oran Berries on this floor. 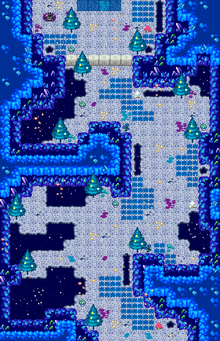 The boss of this dungeon is the Mythical Pokémon Jirachi. Like Mew, Jirachi wishes to play with the player, and calls the game "destruction." Unlike Mew, Jirachi doesn't cry when defeated. Instead, Jirachi says that it was fun, and Jirachi tells the player to come back sometime, saying that next time, Jirachi will have a game that the player will not win. It knows the moves Energy Ball, Ice Punch, Iron Head, and Psyshock.

Secret Rooms appear in Starlit Lagoon, from Floor 25 to Floor 43. There are two Deluxe Boxes. Honey may be used to spawn a recruitable female Meowstic once per Secret Room.

Starlit Lagoon has Mystery Eggs that can appear on the ground or in walls, starting on Floor 50.

Starlit Lagoon has a wide variety of Pokémon and most of them are Water- and Psychic-type, which is good for training Pokémon with types that are super effective on them. The dungeon's floors usually have a small amount of rooms, while Pokémon spawn in large amounts. This is the only dungeon where players can recruit Gothita and Munna, and Espurr. Players have a chance to obtain Jirachi's Heart Slate and use it with the Mystery Part to summon Jirachi in dungeons. This gives players access to its signature move, Doom Desire.