HgSs) Dance of the Clefairy

Anime) The Caves of Moon-viewing Mountain

Anime) The Caves of Mt. Moon

Mt. Moon (MM) is a dungeon reintroduced from PMU 6, placed northwest of Archford, east of Boggy Wastes. To access Mt. Moon you must have Rock Smash unless it has been completed before, in which you can use the unblocked shortcut to the entrance. While the dungeon has 60 Floors, it also has two paths and a secret miniboss; which path you continue on depends on which stairs you take at Floor 20. The alternate path of this dungeon includes no bosses and has 40 Floors.

After Floor 10, there is a section which requires Rock Smash to get through. Rock Smash is only needed if you haven't completed Mt. Moon, otherwise you can use the warp on the left to warp straight to the locked doors. There is a Lunar Key hidden in the bottom-left corner that you need to get to open the locked doors and progress onto Floor 11 and will automatically disappear from the bag then. There's an Escape Orb at the floor's entrance in case you do not have Rock Smash. A second Escape Orb, two apples and two Leppa Berries are additionally hidden in parts of this floor. 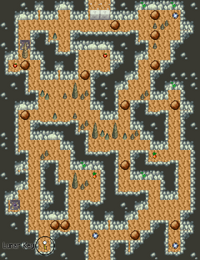 After Floor 20, there will be a room that endlessly loops with many stairs. One staircase has a blinking star next to it; this will bring you on the normal path through Mt. Moon. The one left and up from where you spawn in brings you on the alternate path; it ends at Floor 40, (you start at 21) and has different scenery and a different mix of the same Pokémon you'll see in the normal path. Lastly, one of the stairs brings you to the miniboss with Clefable and Clefairy. Note that their staircase does not have a "Do you want to continue?" option and will immediately warp you in. All the other stairs at this interlude simply respawn you in the Pixiefall Arete.

After Floor 30, there is a midpoint with a Kangaskhan Storage. 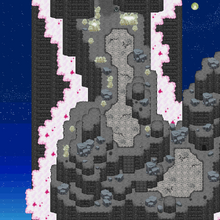 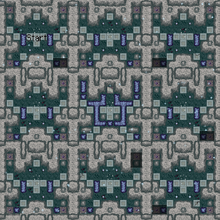 On Floor 45 is a sealed chamber with a Cute Box that can contain the following items:

This information needs to be expanded. You can help P.MysteryUniverse Wiki by expanding it.

In the alternate path there are 40 floors. It has no sealed chamber or midpoints.

There is a secret miniboss you can fight, accessible in the interlude after Floor 20. The lowest right staircase will take you to a room with many Clefairy and two Clefable. Once you beat them, you will be brought back to the Floor 20 interlude. Neither Clefable or any of the Clefairy drop anything when defeated.

After Floor 40, there is a midboss. It is a reference to Team Charm from Pokémon Mystery Dungeon: Explorers of Time/Darkness/Sky (Medicham, Gardevoir, and Lopunny), with an additional Wobbuffet.

The final boss of Mt. Moon is Deoxys. Deoxys is a Pokémon from space that does not value anything but the resources from the planet. After defeat, Deoxys is shocked about its defeat, and then tells the player that they have not seen the last of it. It has the moves Hyper Beam, Psycho Boost, and Giga Impact.

The Cliffside Lake is the end room for the main path, after beating Deoxys. It has two Deluxe Boxes near the entrance of the room.

The end of the alternate path has four hidden Stardusts in the room along with the boxes. As an easter egg, you can use Rock Smash on either of the locked doors and have the message "Soon!" appear.

In the normal path, Secret Rooms can appear starting from Floor 41. If Honey is used, several Beeheeyem will spawn, and rarely a recruitable Elgyem. They can be spawned multiple times, like Harmonic Tower's Secret Rooms with Bagon. There are three hidden Stardusts in this room as well.

There is a Kecleon Shop on Floor 35 and 50 in the normal path only.

Mt. Moon has Mystery Eggs that can appear on all floors, on the ground or in walls in both paths.

Mt. Moon is a popular dungeon for many reasons. Deoxys has a chance of dropping rare and useful items; a Tight Belt, Exp. All, or its Heart Slate, which allows it to be summoned if the Heart Slate is combined with a Mystery Part. The exclusive recruitable Pokémon Kecleon, Purple Kecleon, and Beldum are found here. Blissey and Chansey can spawn, along with the Nidoran family spawning with the move Beat Up, making it easy to gain maximum experience every floor.