DPPt) Crater of the Lake

Boggy Wastes (BW) is a dungeon located in northeastern Archford. The dungeon has mainly Grass-, Poison-, and Ground-types. It has 48 Floors and a rest point after Floor 24.

On Floor 30 is a sealed chamber with a Glittery Box that can contain the following items:

After the first boss, there is a rest point with a Kangaskhan Storage statue. 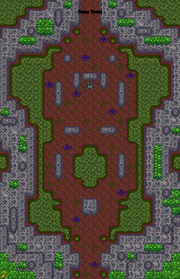 There are two sets of bosses found in Boggy Wastes. The first is an Arbok and two Ekans as minions. They are located after Floor 24 of the dungeon. No items are dropped upon defeating them.

The second boss is located at the end of the dungeon. The boss is Swalot and Muk with three followers of their respective pre-evolution. No items are dropped upon defeating them.

After completing the dungeon there is a final room with a paradise theme.

The first time you arrive here, Ra'akuma, the Elder Vaporeon, greets you with surprise and thanks you for warding off the troublesome Pokémon before they could ruin the sanctuary.

There is a single Deluxe Box found here.

Secret Rooms appear starting from Floor 25 and have four boxes. The switches located in the Secret Room are used to open the doors to get the Deluxe Boxes. There are two hidden Deluxe Boxes at the bottom-right and bottom-left corners.

Boggy Wastes has Mystery Eggs that can appear starting on Floor 25.

By completing this dungeon the player can later talk to the Mayor and obtain the Aquatic Key. This key is needed to enter the dungeon Murky Trench and obtain HM Dive. You can find the Mayor near the entrance of Murky Trench, which is located far south, on a separate island across the ocean in Archford. Dusts are common here, and this is the only place where Mudkip is obtainable at.